This is a summary of a talk given by Samuel Sinyangwe from Campaign Zero on December 3, 2019.

Since 2015, four laws have been passed in California to address racial bias and create more transparency in policing. These laws have resulted in public access to this data and the power to analyze it. These laws include:

The Racial Identitiy and Profiling Act (AB 953), requiring law enforcement to collect and report data on stops, searches, and other interactions.

The data recently made available by San Diego Police Department (SDPD) was examined. This includes 158,757 police stops from 7/1/2018-6/30/2019. Those stops include 36,424 searches and 24,761 arrests during these stops. Force was used 3,122 times in 2,945 different encounters. The disparities by race, perceived disability status, sexual orientation and gender identities were examined.

Some of the key findings of the data analysis done by Samuel Sinyangwe include:

In 85% of SDPD beats, black people were stopped at higher rates than white. 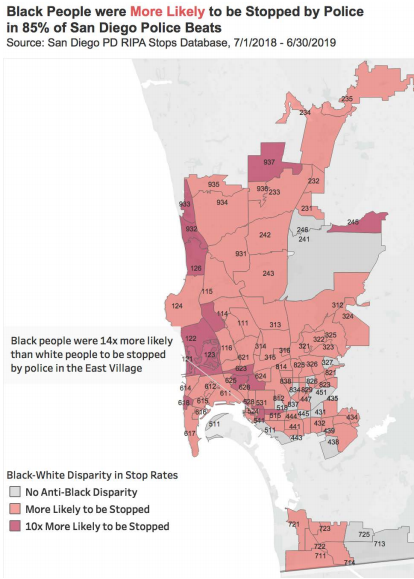 Racial Disparities in Use of Force & Severity of Force

SDPD was more likely to use force, and even more severe forms of force against black people than white people. 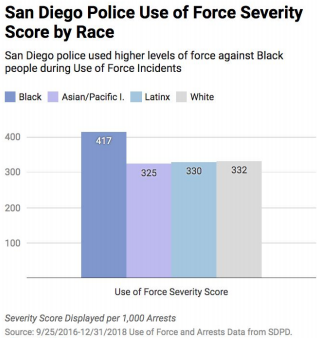 Data and analytics can make it possible to make data driven policy and law. In California, there are ongoing efforts to limit use of force in policing, ensure better training, and independently investigate and prosecute officers for misconduct.

“Data without action is meaningless”